Home
Finland
Travel to Lapland – Where is Lapland – Lapland Map

It’s their faces I’ll remember most. Eyes like saucers, mouths open in disbelief, their necks twisting back and forth to look first at the snow-covered fields spread wide beneath them and then at me, as if seeking confirmation that what they were looking at was indeed real. Their excitement was palpable, and yet our plane hadn’t yet touched down in Lapland. In truth, I was almost as thrilled to be here. I’d been waiting for my kids to reach an age (seven and five) where they’d be able to remember this trip and all the for-the-very- first-time experiences they’d garner, including – having been born and raised in Dubai – playing in deep snow.

Travel to Lapland – Where is Lapland – Lapland Map Photo Gallery 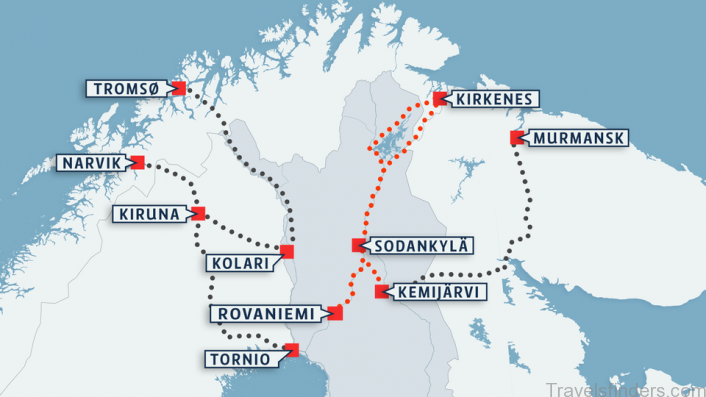 Myself, I was more excited about being in the homeland of Santa Claus just before Christmas, given that I’m the type of person who would happily put their tree up in early November if my wife would let me. Bah humbug. Our private audience with Santa was to come. First, on arrival at Kakslauttanen Arctic Resort – via a short coach transfer from Ivalo Airport, during which we had to stop to let a reindeer cross the road, as you do – we swapped what little winter-appropriate clothes we’d mustered from various friends in Dubai for full-on thermal suits, hats, gloves and boots. 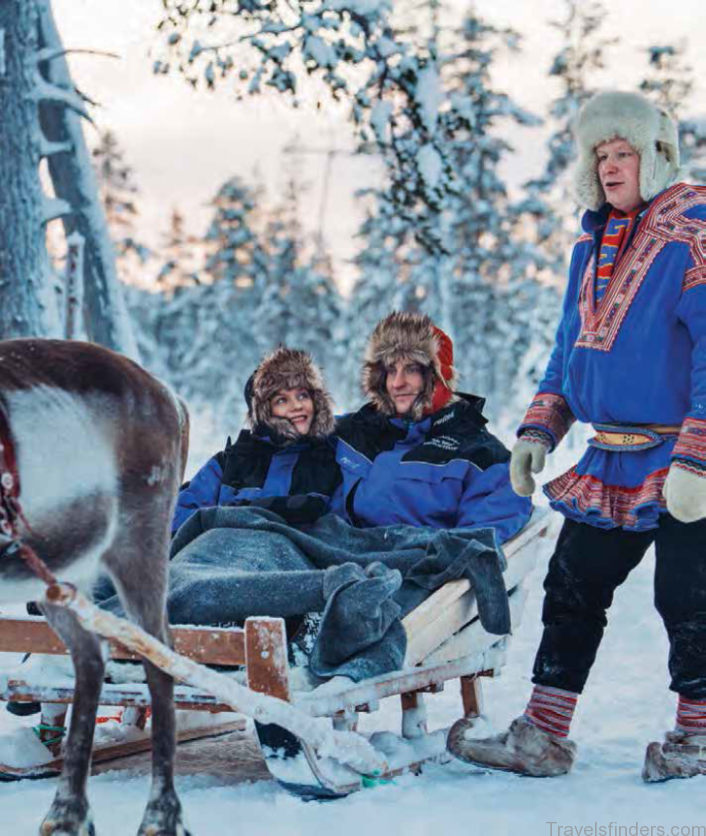 Then it was into the snow, where the first thing I had to do was try in vain to remove the snowball my eldest daughter Aerin had planted perfectly on my neck so that, on impact, it broke up and slipped down my spine. The air, so crisp and cold, turned momentarily blue. I suffered further in my attempts to build a snowman. 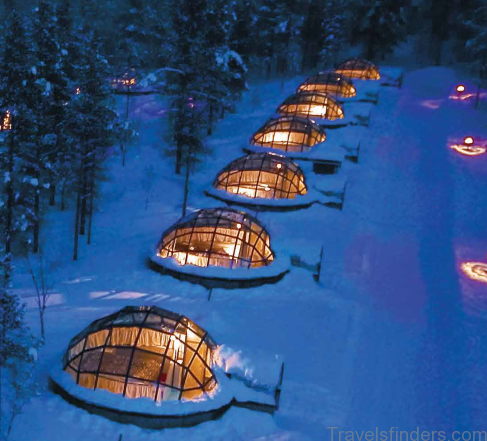 So fine was the snow that I struggled to roll anything larger than the size of a tennis ball before it disintegrated in my hands. “It looks a bit like a pyramid with a pea on top,” reckoned Aerin, distinctly unimpressed with my best effort at recreating Frozen’s Olaf. She was equally unimpressed when I landed a snowball on her head in response. It wasn’t long before the temperature swing, from 28°C back home to -9°C in Lapland, began to bite – Jack Frost nipping at our noses, toes, and fingertips. But there was no freezing the urge to take a sledge to the top of a steep hill, which we slid back down at such speed that the parting snow kicked up and smothered us. To passers-by, our rolling snowball would have probably looked like the onset of an avalanche. 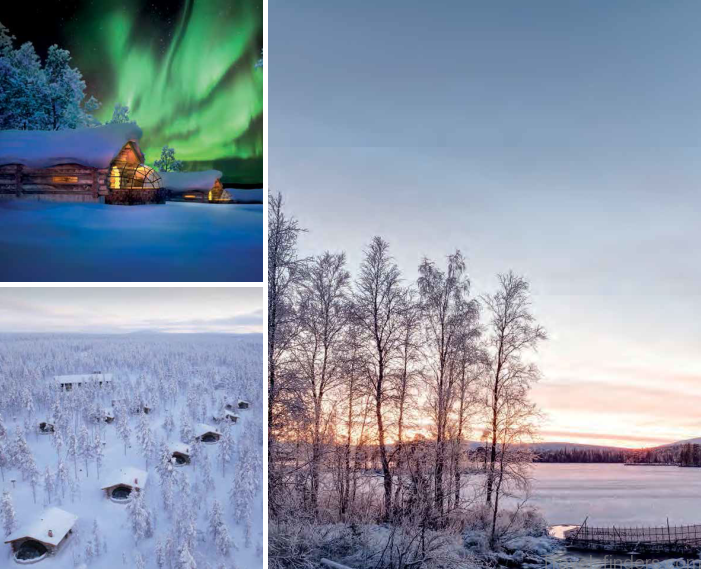 We thawed out back in our Kelo Glass Igloo, part log cabin, part glass dome and, with its roof capped in a good foot of snow, every bit the postcard-perfect winter abode. Inside was an open fireplace (more of that in a minute) and a sauna, in which we all sat to remind ourselves of summer in Dubai. Prior to dinner on our first night, the kids reacted with wonderment when the owner of the resort introduced himself as Santa’s brother – he did bear a canny resemblance, it has to be said – but the festive cheer nearly dulled to a whimper when we perused that evening’s menu. The main course was reindeer, though it didn’t specify which one, or whether there was a surcharge if yours had a very shiny nose.

We’d booked a reindeer safari for the next morning, so rather than educate the kids by telling them that eating reindeer in Lapland is as common as eating shawarma in Dubai, we chose instead to lie – telling them the menu was Christmas- themed, and that either side of reindeer meat they could order Santa soup for starters and elf ice cream for dessert. Thankfully, our waitress said they could also order chicken nuggets and chips.

Christmas was saved. That night, the four of us lay on the bed inside the glass igloo part of our cabin and scanned the night sky for the Northern Lights. While sightings aren’t overly common in November, if they are spotted word soon spreads around the resort and faint cheers from the assembled crowd will direct you to the best viewing point. Lucky for us, we didn’t have to move an inch, as right above our heads streaks of green pierced the darkness. They were pale that night, a mere hint of what they often can be, but it was yet another moment to cherish and we were only at the end of our first day. Reindeer are beautiful creatures up close (I was glad I ordered salmon the previous night) and a gentle sleigh ride through the forest next morning, when the sky was a mix of baby blue and softer-still pink, was wonderful. Midway through the two-hour safari we stopped and headed inside a traditional Lappish teepee to enjoy hot chocolate, ginger biscuits and the heat from a roaring fire. And it was that charming experience that encouraged me to light a fire of my own once back in our room. 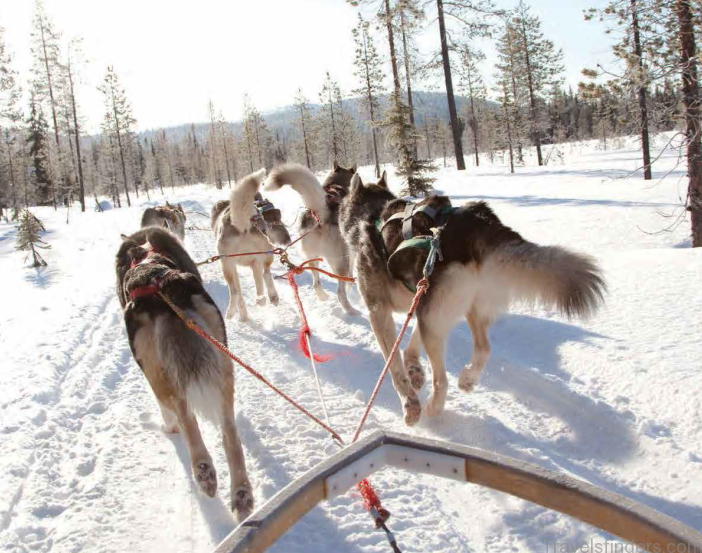 My fire-lighting skills are restricted to turning the knob on our gas barbecue, so it was with a huge amount of pride that I stood back and admired the flames licking up the fireplace after my very first attempt to light it. Man build fire. Me man. Unfortunately, me also forgot to open the chimney, and before long our room was shrouded in smoke and the ear-piercing screech of the fire alarm had wiped the smugness clean from my face. Our only option was to open the door for an hour to let the smoke out and the -9°C chill in. Me not very popular with wife and kids. On the winter-safari scale, at the polar- opposite end to the placidity of reindeers is the excitability of huskies. My wife Victoria and I listened intently as our guide shouted out riding instructions over the incessant cries of the eager-to-run animals. Of the assembled riders, 16 or so, our girls were the only children, and Victoria and I swapped concerned glances when it became apparent that the only thing stopping the huskies from making off with our kids was the strength of our grip.

As the single rider, you grip a handle at the very back of the sleigh, and place one foot on either side of a metal brake. To bring the huskies to a halt, you need to jump fully on the brake between your feet. “What happens if you fall off?” asked one woman. “Don’t fall off,” reassured the instructor. With the girls snuggled up in blankets and sat in their respective sleighs, Victoria and I drove one each, our knuckles no doubt white beneath our thick gloves. But as soon as you’re accustomed to the speed of the huskies, following the initial surge when they’re let loose, the experience is incredible and an absolute thrill. You head deep into the forest, through tall trees, their branches weighed down with fresh snow, and the only sound is that of the huskies beating a path throw the snowfall. Having mastered seven dogs, I also like to think I recovered some of my manhood lost in that fire. Well, I didn’t fall off, at least. The best was saved for last. Beneath their thermal suits the girls wore their only-for- Christmas dresses and sparkly shoes for our date with Santa Claus. The suits were swiftly discarded when we reached the warm of the resort’s reception, where Mrs Claus was waiting. “Are you ready to meet my husband?” she asked. Both girls were too tongue-tied to offer up any response beyond their wide eyes. Mrs Claus led the way through the snow, past a house with a tiny door for the elves and over a bridge under which a river laced with gold flowed, and towards the door of Santa’s house. Mrs Claus had set the scene perfectly. Santa opened his door and welcomed us inside.

There was a roaring fire, a decorated tree, and a writing desk piled high with all the letters that he receives from children around the world. Thanks to the quickfire questions of my youngest daughter Pandora, the girls learned a lot about Santa, such as porridge being his breakfast of choice and that he’s partial to one or two ginger biscuits, which I guess explains the paunch. They then handed Santa the letters containing their Christmas wish lists and received a present each.

From Santa’s house Mrs Claus led us to feed the reindeer – the same ones that fly on Christmas Eve – and then to an elf’s workshop, where we saw how all the presents are made (it’s all to do with the gold extracted from that river, but don’t tell anyone else or Santa might add me to his naughty list). The whole thing was incredibly well done and, I have to say, even a touch magical. Halfway through it I turned to look and saw my kids’ faces convey everything from curiosity and uncertainty to elation and sheer disbelief at where they were and what they had just seen. And even allowing for all the fun and the memories we made in Lapland, what I saw then was reason enough for making this the trip of a lifetime. Inspired to travel? To book a trip, call +971 4 316 6666 or log on to dnatatravel.com