Grape growing ‘on the edge’

We can learn more about natural environments and the way people assess them from Central Otago’s experience in growing grapes and making wine than from any other New Zealand wine region. Central is often portrayed as being ‘on the edge’. Beyond the edge is the way that the established wine industry of the North Island judged it when grapes and wine were being considered as a possible growth industry for Central Otago in the late 1960s and 1970s. Many industry figures who visited the region expressed doubts about Central’s ability to ripen vinifera varieties and to establish an economically viable industry. Deceived by the limitations of the method used to assess it at the time – the degree-day – they read Central’s climate wrongly.

The sinuous valleys, terraces and hillsides where vines are grown in Central Otago extend over large distances and present many variations in exposure, microclimates and soils. Local knowledge, local experimentation and entrepreneurship, local capital, local enthusiasm and local methods of developing vineyards that created capital saw winegrowing restarted here. Talented winemakers and viticulturists from outside the region were attracted. While the total area in vines is about one tenth the size of an average high-country run, they have a disproportionate impact on the landscape, people’s perception of the region, and the local economy. During the growing season their green patchwork stands out from the dun-coloured tussock. From March onwards the shimmering white, brown or green of bird netting gradually gives way to the reds, oranges and browns of Central’s autumn palette.

The geography of the region’s development has been especially important. The wide distribution of the first five producers resulted in comparative knowledge of the diversity of the sub-regional natural environments, and the qualities of the fruit they produced. When combined with studies related to the Clyde Dam to gather the best microclimatic information of any region in the country, the mix was potent. Central Otago is a region making wine and one where winegrowing helps to make this region. It is now also New Zealand’s most specialised wine region. A single grape variety -Pinot Noir – made up 78 per cent of its vineyard in 2010. As recently as 1990 the region was growing just 1 per cent of New Zealand’s Pinot Noir. Ten years later it had increased its share to over 10 per cent, and by 2010 to over 25 per cent. Only Marlborough has a larger area in Pinot Noir. In the 25 years of Pinot Noir’s primacy in Central it has not been seriously challenged by other varieties. Instead, growers have made sure that their replanting has included promising new clones of Pinot Noir while experimenting with white varieties to support it.

For a short time in the late 1990s it seemed as though Chardonnay might become the second most important variety but, as the growers themselves have discovered, it is surprisingly difficult to grow successfully here. Its area has remained static, although it seems certain to remain a lesser variety, including for blending in sparkling wine. By the millennium, Pinot Gris had emerged as the second most important variety with more than twice the area of Chardonnay. Riesling has increased to be about the same area as Chardonnay. Expect more complex Rieslings with low alcohol levels to emerge from Central Otago as grape growers and winemakers refine their skills in vinifying it.

The sub-region of Bannockburn is a model of the likely future spatial organisation of winegrowing in Central Otago. These enterprises have their wineries built on the site of their main vineyards. The same is largely true of Gibbston and the Kawarau Gorge where all the wineries also have some vineyards. But increasingly most of these enterprises have either planted vineyards or buy grapes from localities where Pinot Noir has higher probabilities of reaching physiological ripeness every year. They are searching for greater complexities in the flavour profiles of their wines and more reliable yields of their varieties. Other parts of Central Otago still have an unfinished look to their wine landscapes. Buildings are scarce, roads unsealed and dusty in summer, and in winter the parcels of pruned vines lend a starkness to the landscape. But the stunning views of the encompassing hills and mountains almost always compensate for such limitations.

Clifford Skeggs idealistic model to provide inexpensive wines to the proletariat, while admirable, is unlikely to eventuate in Central Otago. The low yields, rich flavour profiles and approachable tannins of Pinot Noir grapes grown in this region and matured in oak are expensive to produce. It is inevitable that they are too expensive to be quaffing wines. In other regions growing Pinot Noir, notably Burgundy, other varieties, such as Aligote, are grown at much higher yields and become the everday aperitif, often enhanced by flavours from fruits such as cassis.

In Mediterranean climates such as the Caneros and Napa Valley of California, varieties such as Chardonnay can be grown at much higher yields than in Central Otago while still producing rich flavours.

It is tempting to attribute Central’s success with Pinot Noir to aspects of its natural environment. Its continental climate certainly distinguishes the region from most of the North Island and suits the Pinot Noir variety admirably. Small areas with analogous climates are found in interior Hawke’s Bay and parts of the Wairarapa. Pockets of land in the interstices of the Southern Alps have similar climatic regimes to Central Otago but few have its accessibility and potential for selling wine on site at retail prices.

The affinity between clones of Pinot Noir and the continental climate of Central Otago would not have been realised as quickly without the experimental spirit and camaraderie of the first five growers. They shared knowledge with one another and, as Nigel Greening of Felton Road attests, were a willing source of advice to the wine enterprises that followed them. Robin Dicey’s technical role in this second phase from the early 1990s was decisive. He brought a deep practical experience of setting up and managing vineyards and the viticultural practices of several countries. While many did not agree with his advocacy of spur pruning, his commitment to it stimulated debate and encouraged grape growers to understand the architecture of the canopy and the particularities of Central Otago’s climatic regime and soils. Most of all, Central Otago winegrowers have managed to maintain their sense of close community despite the rapid growth of their region during the last decade of the twentieth century and the first of the twenty-first.

REFORMATION, REPUBLICANISM, AND RESTORATION OF BRITAIN 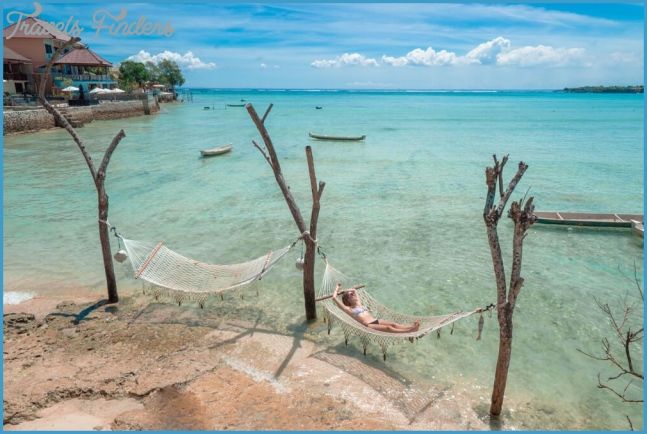 How to Take Perfect Travel Selfies