Unusual Itineraries: These two ships reach ports that others can’t get into.

Kick-back atmosphere: A Blount cruise is one of the closest things you’ll get to chartering your own boat. The word of the day is informality.

BYOB: The ships do not have full bars, but you can bring your own alcohol on board.

These two ships were designed, originally, to go through the Erie Canal. Today, they do that, and a whole lot more.

These friendly small ships carry less than a hundred passengers each, largely retired Americans, on domestic, Eastern Canadian, or Caribbean trips. They have shallow drafts and retractable pilot houses meaning they can sail under bridges and in waterways most ships can’t get into.

Blount primarily cruises the Caribbean and Central America, and then a variety of American itineraries, including the Northeast, the South, the Midwest and Great Lakes, as well as up to Canada during fall foliage season.

Fellow passengers are largely Americans retirees along with a handful of Canadians and Australians. ACTIVITIES

Onboard activities are limited, but might include photography classes, wine tastings, and lectures by naturalists. Ships sail with kayaks, snorkeling gear, and bikes. If you get a fishing license and bring your own equipment, you can fish in some ports.

Only children age 14 and older are allowed on these ships, and there are no dedicated facilities for them

There’s no formal entertainment programs on these ships.

These ships sail itineraries that only hit U.S. ports, so (as is the nation’s law) the crew is American. Service is generally quite good, but very informal. Don’t expect the crew to fuss over you. Blount recommends gratuities of $12-14 per person, per day.

Basic but versatile, these unassuming ships can take you to some very cool places. Just don’t expect much in the way of service or extra amenities.

THE SHIPS IN GENERAL

Grande Caribe and Grande Mariner are simple, basic ships that have nonetheless been lovingly cared for over the years. Fun features like glass-bottomed boats and onboard kayaks make them smart choices for active cruisers.

Cabins If there’s one common theme to these staterooms, it’s that they are small. Most rooms feature two single berths (or an upper/lower berth), while a handful of rooms will have a double bed. That said, decor and bathrooms were updated a few years back, softening the color schemes and adding better lighting. Warning: Six rooms on Lower Deck have no window views.

Public areas & activities Each ship features a main lounge done primarily in shades of white and slate grey, with cherrywood accents on the support columns. It ain’t the height of design, but it’s pleasant. There’s also a large Sun Deck but no fitness equipment, pool or spa. But with bow ramps that lead directly onto the beach on Caribbean sailings, there’s not much need for an onboard pool, is there?

Dining Food is generous and largely American in both taste and style. Think of it as Mom’s home cooking and you’ll do just fine. 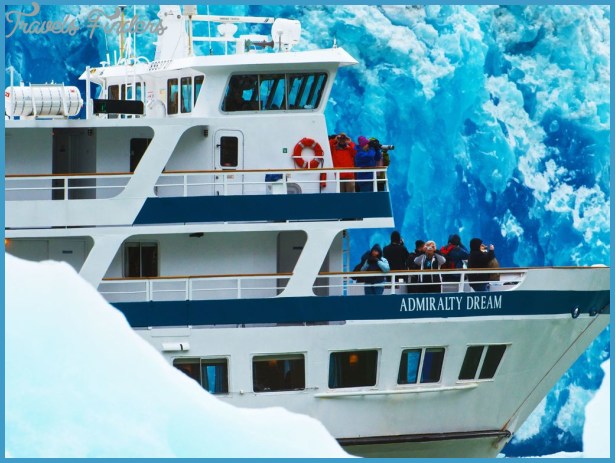