PLANTEN UN BLOMEN. To the west of the Alster, this huge expanse of manicured flower gardens and trees includes the largest Japanese Garden in Europe. (Open 7am-llpm. Free.) Daily 3pm performances ranging from Irish step-dancing to Hamburg’s police orchestra shake the outdoor Musikpavillon from May to September. There are also nightly Wasseriichtkonzerte, with a choreographed play of fountains and underwater lights. (May-Aug. daily 10pm; Sept. 9pm.) North of the city center, the two Alster lakes, bordered by tree-lined paths, provide further refuge from the crowds.

ST. PAULI LANDUNGSBRUCKEN. Hamburg’s harbor lights up at night with ships from all over the world. Take the elevator from the building behind Pier 6 to the old Elbtunnel, which was built from 1907 to 1911 and runs 1200m under the Elbe it’s still used by commuters. At the Fischmarkt, charismatic vendors haul in and hawk huge amounts of fish, produce, and other goods. Don’t shy away if you dislike fish about 90% of the merchandise is something else. (U- or S-Bahn to Landungs-brucken or S-Bahn to Konigstr. Open April-Oct. Su 5-10am, Nov.-Mar. Su 7-10am.)

Though outside the city center, two very different testaments to the atrocities of the Nazi regime are accessible by public transportation.

NEUENGAMME. An idyllic agricultural village east of Hamburg provided the backdrop for the Neuengamme concentration camp, where Nazis killed 55,000 prisoners through slave labor. In 1989, the Hamburg senate built a memorial on the site. Banners inscribed with the names and death-dates of the victims hang in the Haus des Gedenkens, and Walther-Werke has the recorded testimony of survivors. (Jean-Doldier-Weg 39. S21 to Bergedorf, then bus #227 to Jean-Doldier-Weg. Open May-Oct. Su and Sa 10am-6pm, Tu-F 10am-5pm; Oct.-Mar. Su and Tu-Sa 10am-5pm.)

GEDENKSTATTE BULLENHUSER DAMM UND ROSENGARTEN. Surrounded by warehouses, this schoolhouse is a memorial to 20 Jewish children brought here from Auschwitz for testing and murdered by the S.S. only hours before Allied troops arrived. Visitors are invited to plant a rose for the children in the flower garden behind the school, where plaques with the children’s photographs line the fence. (Bullenhuser Damm 92. S21 to Rothenburgsort. Follow the signs to Bullenhuser Damm along Ausschlaeger Bildeich and across a bridge. Open Su 10am-5pm and Th 2-8pm. Free.) 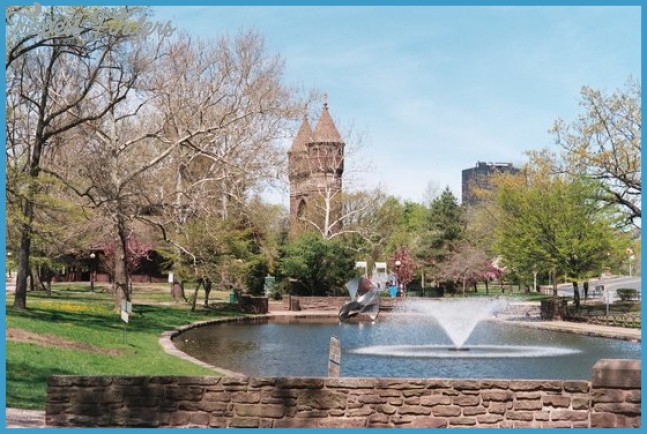 5 Best Things to Do in Connecticut

Tags:hamburg rathaus, places to visit near hamburg, st michael's church hamburg, what is hamburg famous for