» Howtown Hotel, Ullswater. The more remote a cafe or pub, the more charm and value I subliminally attach to it, regardless of how good (or bad) the food is. The Howtown Hotel is worth the trip round or across the lake to sit on their pristine lawn or, more likely, in front of a roaring fire. Check the opening times, especially in low season.

» Fellbites Cafe, Glenridding. Anywhere that advertises a fried egg sandwich (with two eggs) as a ‘lite bite’ on their menu is a clear winner to me. On my last visit there didn’t appear to be any smashed avocado on their menu which can only be a good thing.

» The Travellers Rest, Glenridding. Tucked away up Greenside Road, I’ll always walk the extra few minutes for a pint in the cosy bar.

Ullswater is a busy boating lake. If you don’t intend staying very close to shore then a tow float, whistle and bright cap should be the first things out of your bag. It can often be choppy with the fells creating a funnel effect down the valley and along the lake. You definitely shouldn’t swim around piers or jetties during operational hours; exercise caution at other times as there might be private sailings or special events, especially in the summer months. Events take place on the lake year round. Check the Ullswater Yacht Club website for dates of regattas and races before setting out. www.ullswateryachtclub.org I have not included any swims near Patterdale or Glenridding as the shoreline is largely private and boats are launched from here.

Residents of the lakeside campsite at Side Farm can access the water straight from the campsite. The campsite offers refreshments for passing walkers but a swim here is strictly for campers. Between Glencoyne Bay and Gowbarrow Bay there are countless small lay-bys where you can pull in and hop straight in the water. These are too frequent and similar to warrant individual references. The lake bed shelves steeply but is generally boat free close to the shore.

Sadly there have been a number of deaths in Ullswater. Not all of them involved swimmers but the majority were people who had entered the lake with the intention to swim or at least paddle. Anecdotal evidence suggests the higher number of deaths in Ullswater could be related to the relative ease of access combined with the steeply shelving edges. Ullswater is a cold lake, fed in various places by very fresh water that emanates from high northand east-facing slopes. These tend to get less sun and hold snow the longest after winter fades. The warnings of deep cold lakes are often bandied about but with Ullswater they have proved to be accurate so take extra care.

There is something about Ullswater that intimidates me. I struggle to approach it with the same fond anticipation as Crummock Water, Grasmere or Derwent Water and I can’t put my finger on what provokes this unsettled feeling. Ullswater has claimed the lives of a few people and I put this thought to the back of my mind before a swim. Instead I go through that unspoken risk assessment that every swimmer does, or should do, before I get in.

Depth, conditions, entry and exit point, tow float, whistle. I’m acclimatised and warmed up. I have a spotter on the shore or a companion in the water. Ullswater is less of an old friend and more of an adversary. I prevaricate on its stony shores, lake and swimmer sizing each other up with a shifty eye until I start my watch and take a hesitant step into the water. The water is slate grey and initially clear, but as you move out it darkens, sucking the light of the sun. Ghostly plant life below the surface looms out of the dark abyss like skeleton hands of hidden beasts desperately reaching for the light.

I’ve swum to Norfolk Island enough times to know the weeds are there, but they wrongfoot me every time. There is nothing like swimming in the middle of a lake for making you feel completely insignificant. At over seven miles long, Ullswater is the second largest body of water in the Lake District. The vast and dominating Helvellyn range that encloses the head of the lake accentuates my feeling of smallness against the height and bulk of the mountains. Two distinct kinks in Ullswater’s shape create an optional illusion, particularly from the east, where the lake appears to end at Hallin Fell.

It’s impossible to stand anywhere on the lake and see both ends. These bends split the lake into three sections, created by three separate glacial events. The visual journey along its length takes you from the high fells to the rolling countryside of the Eden Valley as the lake flows out at Pooley Bridge. With such distinct characters in each section, Ullswater is like several lakes rolled into one. In my attempts to face this particular, and somewhat irrational, fear I have swum all around the lake in stages, around islands and crossed the deepest section many times. Ullswater still sends a slight shiver down my spine and I emerge feeling somewhat relieved but ultimately satisfied.

I turned to Colin Hill for some Ullswater inspiration. His is a name synonymous with open-water swimming, with marathon and solo channel relays under his belt, as well as organising the longrunning Chillswim Coniston End to End event. He now coaches swimmers near his home on Ullswater and has probably clocked up more lengths of Ullswater than any other swimmer. He takes inspiration from Ullswater’s varied history and revels in the dramatic scenery, taking the windy conditions in his stride. Colin is proud to call Ullswater his home. I’d better give it another try.

Don’t let my apprehensions about Ullswater put you off. It is a magnificent lake. The best place to appreciate its majesty is from a narrow strip of pebbled beach beneath the road under the precipitous face of Stybarrow Crag. You are in the heart of the action here, perfectly positioned to admire Place Fell and Helvellyn or swim to the photographers’ favourite island, Wall Holm.

Reputed to be the most famous poem in English literature, William Wordsworth wrote ‘I wandered lonely as a cloud’ after seeing the daffodils in Glencoyne Park. You can get a unique perspective of them from the water at Glencoyne Bridge.

Across the road from the handy National Trust car park (parking charge), the water is achingly fresh thanks to Glencoyne Beck tumbling down through east-facing Glencoyne and the appropriately named Seldom Seen. Glencoyne is a good starting point for an assault on Norfolk Island, noting that to swim from the northern shore means crossing the path of the steamer. It’s my favourite swim on Ullswater, specifically for the vantage point it offers of Glencoyne and the middle reaches of the lake. From a distance it can be difficult to pick out Norfolk Island against the backdrop of Place Fell, but as you approach the lime-streaked rocks become clear. Norfolk Island is home to cormorants and red-breasted mergansers. It’s a protected nesting site and should be avoided during April and May. Outside of nesting season it is a fascinating place to explore or have a mid-swim picnic.

This three-mile arc around the end of the lake provides countless opportunities for a dip. The character of the lake is very different here, edged by a much gentler landscape than the southern reaches, a little less daunting. Pooley Bridge is a good base for explorations. It can all be done on foot with only a brief section of road walking. Although tremendously rocky underfoot, I like the beach near the boatyard just out of the village, favouring the quiet calm of early morning, the silence only broken by the relaxing clink of halyards. Weeds in the shallows tickle my feet as I glide over them.

They don’t seem to bother me as much as they do in the inky depths at the other end of the lake. The footpath from Pooley Bridge along the southern shore covers almost a mile of shoreline and several stony beaches. There are clusters of sailboats moored along this edge of the lake so care should be taken when entering the water; however, I have never encountered anything bigger than a kayak here. Beyond Waterside House Campsite the shore is private until Howtown Wyke, except for a small lay-by just south of the Sharrow Bay hotel where you can step from your car and into the water in three strides.

Howtown Wyke is the perfect place to greet the day and swim as the sun comes up over the Eden fells, particularly in autumn for the unmistakable and atmospheric guttural sounds of red deer rutting in Martindale. The bay is used by an outdoor education centre and should also be avoided during the operational hours of the steamer. Save this one for an early morning dip. A path trundles round the base of Hallin Fell high above the water turning the corner of Geordie’s Crag and arriving at Kailpot Crag – a sheer cliff about four metres high. It’s popular with thrill seekers who jump into the lake below.

If you can muster the courage you are braver than I am. Just don’t forget to check the depth of your intended landing point before you leap. If you don’t fancy the jump there is much easier access into the water on either side of the crag. Kailpot Crag has a commemorative plaque dedicated to Lord Birkett, situated just above the waterline. He led the charge against Manchester Corporation Waterworks to prevent Ullswater being turned into a reservoir in 1962. He died a few days after the proposition was defeated. As well as the plaque, Ullswater Yacht Club hold the Lord Birkett Memorial Trophy every year in July. It’s a spectacle to watch from the shore and from a very safe distance in the water!

At Silver Bay beat a path through the bracken to a sheltered quiet beach. Several misleading sheep trods exist delving deep into bracken or soaking moss; however, if you look closely, there is a dry and established way leading down to the lake close to Silver Point. The bay is a typical stony Ullswater beach with a weedy fringe and a gently shelving lake bed. It’s a bay you can only get to on foot or by boat so it’s likely to be quiet, especially as the way down from the path is not readily obvious and many will pass it by. Silver Crag offers a superb vantage point above the lake. Beneath is a wide bay and small island called Lingy Holm. A more famous geological feature is Devil’s Chimney, a rock face emerging from the lake with several vertical fissures emanating upwards. Little information is available on how the headland acquired the ominous name, but it’s said to refer to cold air rising off the lake and entering the fissures, then appearing at the top of the cliff like smoke from a chimney 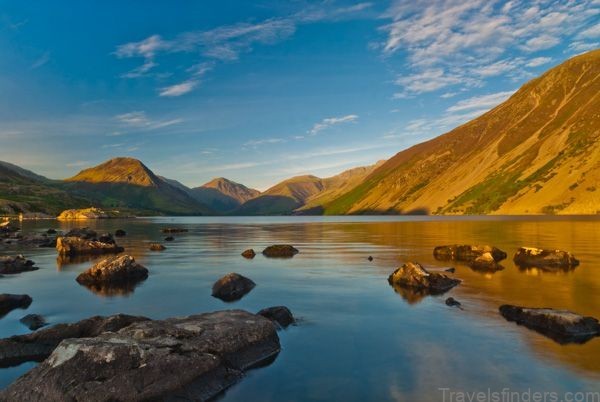