Being one of those ‘iconic’ Lake District destinations, Wasdale is much written about. The emphasis tends to fall, quite understandably, on the scale and grandeur of the valley and the lake it encompasses. Wast Water is not just the deepest lake in the Lake District but the deepest in England too. Nearby Scafell Pike is the tallest mountain in England and is surrounded by equally grand satellite fells. It is the central massif of the Lake District from which the trajectory of high terrain extends for miles. Wasdale is the kind of place that can leave you feeling a little bit, well, insignificant. For motorists at least, Wasdale is a dead-end valley.

The road peters out at Wasdale Head and onward travel from here must be self-powered. Visiting the valley requires effort as it is not on the way to anywhere and has no public transport (though rumour has it you can still grab a lift in the post van). As you turn off the A595 at Gosforth on to the winding valley road it can feel like you are leaving civilisation behind and entering a wilderness. There is no mobile signal. They barely have a television signal up at Wasdale Head, and electricity didn’t arrive in the valley until the 1970s. Wasdale really is the valley time forgot.

Stark imposing hills enclose the head of the valley, giants in both stature and mountaineering history. Brooding crags bristle with atmosphere. Even in the spring sunshine with lambs gambolling in the fields, there is a slight menace to the mountainous backdrop. Wasdale is mean and moody, with no soft edges and heaps of attitude.

I absolutely embrace the extremes of Wast Water. I love the petrifying depth on the edge of the Screes and swim across to sit on submerged ledges and dangle my legs over a void that goes on forever. The Screes reflect grey across the water but beneath the surface the colour is an electrifying cyan blue. The water is bracingly cold all year round. It’s the clearest, purest lake too, supplied by water from becks and streams that rise in the very heart of the Lakeland fells. The cold is like a slap in the face. In summer, having acclimatised to the relative mildness of Bassenthwaite Lake or Derwent Water, I find my swims have lost that endorphin rush of razor-sharp cold water. When this happens I know it is time to head to Wast Water.

At the head of Wast Water there is a National Trust campsite and car park. Access is limited here and, if I’m honest, so is my research. After one benighted swim which featured a four-metre scramble and lots of brambles, and another featuring a very fast river swim resulting in some minor bruising, I resolved that if there was no right of way on foot, I would go elsewhere. If you absolutely must swim from the head of the lake there are ways in either via careful negotiation of Lingmell Beck or Lingmell Gill, from the roadside or from Wasdale Head Hall Farm.

If you like your water cold and deep then arriving at Wast Water is a good start. If you also like a proper challenge then a ‘walk’ along the Screes should scratch that particular itch. The shattered boulders of the southern lakeshore are not really considered to be a path, more a boulder field requiring you to hop and scramble from rock to rock – even for the most fleet of foot it will prove slow-going. Where the Screes enter the water they continue beneath the surface, a sheer drop leaving no ledge or lake bed to stand on. A swim of absolute commitment and not for the fainthearted or inexperienced.

YHA and Nearby Beaches

Wast Water’s granite beaches are tough going on bare feet. I’ve not yet found a way in that doesn’t leave me rueing a forgotten pair of swimming shoes, sat uselessly at home. Thankfully, the permachill of the water quickly takes my mind off the sharpness of the stones! A path around Low Wood arrives at the lake near the mouth of the River Irt and continues to a pink granite beach with that classic, endlessly photographed view of pyramidal peaks at the head of the lake. It’s just off a footpath but feels like it’s just you and the lake. Here, the lake bed gradually shelves allowing a gentle wade in rather than a plunge, unlike the rest of the lake. The path continues and passes by YHA Wasdale Hall, a grand building dating back to 1829. This hostel couldn’t be better situated for a wild swimming weekend, with only a lawn and a small car park separating the building from the lake.

Not far past YHA Wasdale Hall the path runs out and you find yourself walking on the road or over rough ground. Along these first stretches of road it’s easy enough to walk along the shore and dip in wherever an opportunity presents itself. For drivers, there are several lay-bys of varying size affording instant access from car to water. Make sure you are not parking in a passing place! Wast Water is a popular diving location and you will often encounter divers on this stretch of coastline. Along this shore the lake bed shelves quickly and deeply. Non-swimmers and paddlers should take care. Such is the clarity of the water that you can still clearly see the lake bed and feel as though you might graze it with a toe even at a depth of several metres, until it slides off into a great void. Swimming in Wast Water is the closest I will ever get to flying.

There is a small free car park at Overbeck Bridge where tingly cold Over Beck flows into Wast Water. It’s even colder than the lake! Swim here for a majestic view of Hollow Stones, Pikes Crag and Scafell Pike.

There is no public transport to Wasdale. The closest you can get by bus is on the Borrowdale Rambler (78) from Keswick; alight at Seatoller to hike over Sty Head Pass – it’s a magnificent three-hour walk in mountainous terrain. Trains run along the west coast of Cumbria and stop at Seascale, Drigg and Ravenglass – convenient in the loosest sense of the word, it will require self-power or a taxi booked in advance to complete the journey. The valley road runs along the length of the lake; there is a small car park at Overbeck Bridge (payment by donation) and further parking at the National Trust car park at Brackenclose (parking charge).

» The Screes Inn and The Strands Inn, Nether Wasdale. These two pubs serve a wide variety of food (The Screes Inn has plenty of vegetarian and vegan options); best of all they share their own microbrewery.

» Wasdale Head Inn, Wasdale Head. One of the most remote pubs in the Lake District situated at the road end at the head of the valley.

» Gosforth Bakery, Gosforth. Purveyors of pies of mythical stature. The bakery closes at 2.00 p.m. if not earlier – avoid disappointment and buy your pies on the way to the lake! General notes on Wast Water Small patches of mobile phone signal and 4G have started appearing in Wasdale but it should be assumed that there is no reliable signal in the valley. 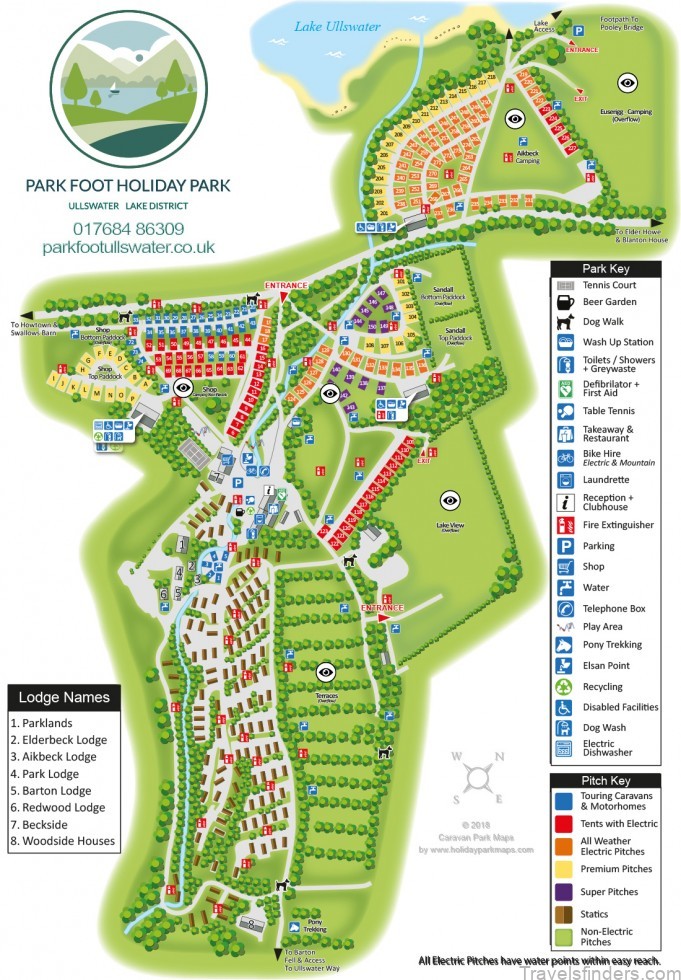 Map of Ullswater Camping in Ullswater