On January 26, 1989, Australian national radio station, Triple J, held a countdown of the previous year’s Hottest 100 Songs as voted for by listeners. It’s happened every year since (apart from 1992) and is the cultural gem of a generation of Australians.

The emerging Australian craft beer community, clearly fans of the famous radio show, launched their own Hottest 100 for beer, with the results of the drinker-voted list also being revealed on January 26, which is Australia Day. Since 2010, Stone & Wood’s Pacific Ale has been in the top three, winning the competition three times, where it typically leapfrogs onto the podium with Feral’s Hop Hog.

Stone & Wood was started in 2008 by three mates, Brad Rogers, Jamie Cook, and Ross Jurisich. They built their brewery a few miles from the beach in Byron Bay. Their first beer was Pacific Ale and it’s remained their bestseller ever since.

Pacific Ale is now an iconic beer that created a new style of Australian ale—most other brewers call their versions “Summer Ale,” but we all know they’re copying Pacific Ale. It uses all-Aussie ingredients, including barley and wheat, and Galaxy hops from Tasmania. It was a leader in fruit-forward aromatics, thanks to those glorious Galaxy hops, which give passion fruit, pawpaw, mango, and tropical fruit, which are the signature accents of this beer and of the style. It has a subtle sweetness, which plumps up those fruity hops, and is aided by a satisfying weight from the yeast and by being unfiltered. It has a brightness, a lightness, a beauty all of its own.

When walking around Byron Bay you will instantly spot a glass of Pacific Ale. It has a fluffy white cloud of foam above a hazy yellow beer, which looks almost neon in the glass, as if the sun is reflecting off the beer. And when you’re there, drinking by the sea, you can see how evocatively and perfectly Pacific Ale fits this place and suits the Australian summer.

The best place to drink Pacific Ale in Byron Bay is at The Beach Hotel (1 Bay Street, Byron Bay, New South Wales 2481) a large open bar opposite the sea. This is where the beer was designed to be drunk and even the most land-lubbed and city-slick drinkers will grasp this imagery: you’re in the summer surf, you’re sweaty and salty, and hot and hanging for a cold one. You walk off the sand and straight to the bar, and there’s a glass of brightly hazy Pacific Ale waiting for you. It’s fresh and fruity, oh so fruity, and dry and refreshing. It’s hard to imagine another beer being quite so able to quench a summer thirst like this one.

A pint of Pacific Ale served in the taproom is a welcome refresher after a day at the beach.

You can visit the Byron Bay Brewery (1 Skinners Shoot Road, Byron Bay, New South Wales 2481), which is open every day from 12pm until around 5pm. In 2016, they added a larger production facility out of town; you can’t visit that, but Byron Bay is cooler anyway. It has a cellar-door style, so you go along and have a tasting tray that includes the core beers, plus some small-batch specials. Other beers include Cloud Catcher, which is basically a bigger version of Pacific Ale and uses Galaxy and Ella hops; there’s Green Coast, a very good, soft-bodied lager, with a light freshness of hops, and Jasper Ale, an Altbier-ish copper ale. Once you’ve had your tasting tray, then head back to town to the other essential place to drink—The Rails (officially called The Railway Friendly Bar, but no-one calls it that)—which has played free live music every night for over 30 years.

Stone & Wood’s Pacific Ale is an important beer for its use of all-Australian ingredients, for being the first fully fruit-forward Aussie beer, deliberately hazy in a country of sparkling, bright pale ales, and for being the beer that has created a new style of Australian Summer Ale. It’s one of my favorite beers, something I often drink in London (which, the Internet tells me, is over 10,300 miles/16,600km away from the brewery), and a beer that was right at the top of my Beer Bucket List must-visit destinations. While it’s always good in London, it’s even better in Byron Bay, where there’s an intangible link between the beer and the place, an evocative and emotional placement, and something that now shines warm in my memory and allows me to sit at home in the rain and think of the sun, summer, and surf of Byron Bay.

Byron Bay, right on the Pacific Ocean, is the home to Stone and Wood, and the Pacific Ale will always be linked to this epic beachside setting.

It’s a beer that’s definitely in my top three Hottest 100 list of Aussie beers. Also on the podium would be Blackman’s Mervyn and Feral’s Hop Hog.

HOW: Open for tasting sessions and tours every day of the week (although there are no tours on Tuesdays). Check the website before visiting, as the address may differ by the time this my blog is published (www.stoneandwood.com.au). 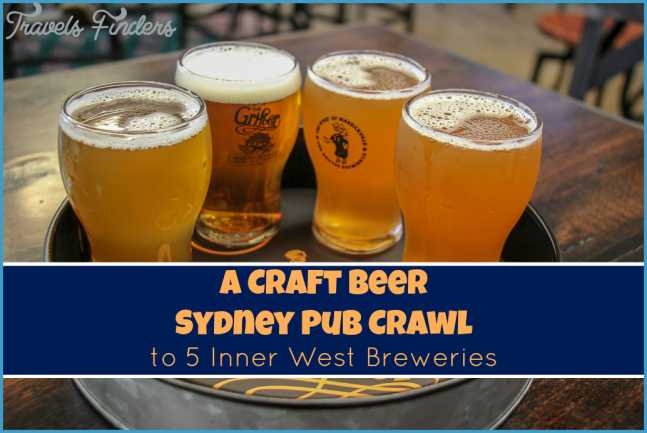 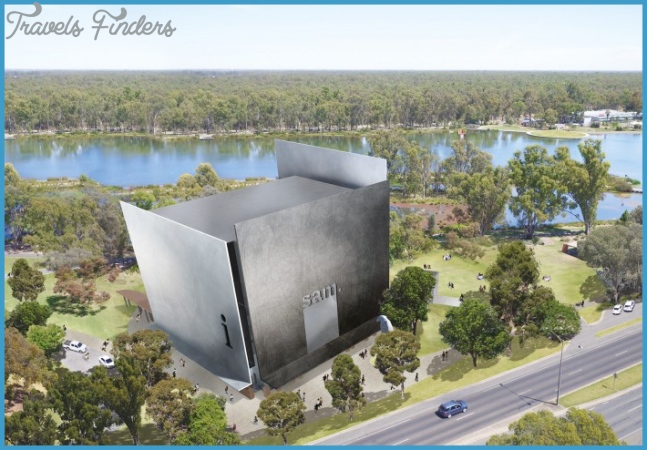