Home
Travel
5 of the Top Gambling Destinations in Europe

While online gambling may be all the rage in the modern age, there’s still a demand for bricks-and-mortar casinos across the globe. In the UK alone, the gambling industry generates in excess of £14 billion each year, with around 33% of this total generated by online activities.

The same principle can be applied across the globe, particularly with land-based casinos increasingly inclined to incorporate technology and provide a more immersive gaming experience.

In this post, we’ll consider the top five gambling destinations in Europe and ask what makes these locations so special,

5 of the Top Gambling Destinations in Europe Photo Gallery

We start with Monte Carlo, which despite being the second smallest country in Europe (after Vatican City) boasts one of the most lucrative casino markets in the world.

It’s population of 35,000 include a number of high-rolling stars, many of whom love nothing more than investing in high-stakes gambling in luxurious surroundings.

The iconic Monte Carlo Casino is the headline act in this beautiful principality, which is established as the gambling capital of Europe. Renowned for its high table limits and thrilling gameplay, this location is a true bucket list item for anyone with a passion for gambling.

While London is not always renowned as a hot-bed of gambling, it is home to more than 20 casinos and has the distinction of being the financial capital of Europe.

With a number of wealthy patrons, London is becoming an increasingly active gambling location and one that plays home to established casino chains such as Grosvenor. There are also a growing number of elite casinos in the region, including Aspers Casino and the exclusive Ritz Club (where membership must be sponsored by an existing client.

Many of the casino games in London are focused on blackjack and poker, so this is important to keep in mind when visiting the region.

Next up is the idyllic city of Prague, which has already emerged as the stag-do capital of Europe during the last five years.

Make no mistake; Prague is also home to a rising number of land-based casinos, many of which have the added advantage of boasting superb architecture and picturesque backdrops. Few cities fuse culture and gambling so effortlessly, meaning that Prague captures to romantic element of gambling and its innate sense of adventure.

Prague is also relatively cheap to visit, making the destination and its casinos accessible to a wider segment of the market.

Like Monaco, Malta is a small and compact destination that appears more like a city than a thriving, independent country.

Malta is also a thriving fulcrum for the thriving gambling industry, and one that includes numerous casinos in a densely populated location. The nation’s status as a tax haven has made it a central hub for the fast-growing iGaming market, enabling operators to reduce costs while expanding into a new part of Europe.

You can also drive from one end of Malta to the other within a couple of hours, making it possible to see all of the region’s casinos in a relatively short space of time.

We end with Amsterdam, which is renowned as a party capital of Europe and home to a growing number of casino brands.

Holland’s capital also has a reputation as Europe’s city of sin, and in this respect it has a great deal in common with the gambling Mecca that is Las Vegas. Like Sin City, Amsterdam’s night life is also becoming increasingly dominated by casinos, with entry level and high-end locations available to suit players of all shapes and sizes.

So, whether you visit Amsterdam for a weekend or longer, you should make time to visit one of the city’s new and luxurious casino destinations! 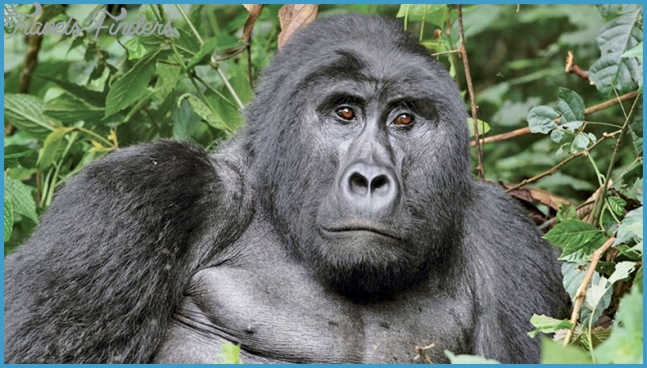