I was in a strong south-easterly, and the seaplane was drifting 30 degrees to the north. At that height, for every mile I flew towards Kagoshima, I was being drifted half a mile away to the north; I decided to climb to see if I could find the westerly air stream that Father Gherzi had thought possible. At 3,000 feet the drift was still 25 degrees, but I climbed on, always hoping to reach a favourable wind just above. At 4,000 feet I checked my drift carefully, and found that it was still 25 degrees. At 5,000 feet I levelled off. The last 1,000 feet had taken thirty minutes to climb; the drift had not decreased, so that so far I had gained nothing by climbing. I flew on, hoping that I should soon pick up a strong westerly. I was happy to be flying again, and contented to be over the sea far from land. I feasted on a cold chicken that Thoms had given me. The sea beneath had been a dirty yellow for the first 80 miles, probably because of the muddy waters coming down the Yangtse Kiang. Now the colour had changed to a dull dark blue.

Two and a half hours out from China the seaplane was no longer drifting off course. The wind no longer had a southeasterly component, and I thought that I was probably in a slight westerly. In this case I reckoned that I could reach Japan, and as I hated the idea of going to Korea or anywhere else, I changed course 26 degrees to the right to get back on to my original route. At three hours ten minutes out I estimated that I had five and three-quarter hours petrol left. With the dashboard speed-indicator broken, and the crude auxiliary one on the outboard strut unreliable, to say nothing of the uncertainty of the wind speed at 5,000 feet, I could not tell how far I had flown. If the strut indicator, which had been reading 60mph all the time, should happen to be right, and if there should have been a 30-mile wind against me from the start, I should be only one-third of the way across, and Japan would be out of reach. I had to get a sextant shot of the sun to find out exactly how far I had flown, so that if necessary I could alter course for Korea while I still had enough petrol to get there. I felt drowsy, my charts were awkward to handle in the cockpit, and neither of them included all three countries -China, Korea, and Japan. It was difficult to plot on the loose windblown sheet, so I decided to descend to the surface, take a sun sight to find the distance flown, and determine the speed and direction of the wind accurately down there. I had a panicky urge to shut off the engine and dive down as fast as I could, but it would have been silly to sacrifice my hard won height. I pressed the control-stick gently forward till the speed rose to 100mph on the indicator, and the spare height enabled me to keep up that speed for the next half hour. I flew under a lake of cloud into a belt of close hot air, and levelled off at 800 feet. At that height I could make no mistake in reading the ocean surface; there was not a breath of wind there, and the rough water was only the lashed-up sea of some distant wind. Therefore, unless I flew into another headwind, I had enough petrol to fly 340 miles.

It had been hard to think up above but here in this sultry air it was a dreadful labour. I was afraid that I might have forgotten how to use a sextant but as soon as I brought the sun down to touch the horizon in the sextant I became absorbed, and I remembered my sextant drill in a flash. They were excellent sights, and I twisted the results out of the slide rule. Then I plotted my position line on the chart, and found I had 270 miles yet to fly. I could reach Japan if there was no headwind for the rest of the way. Should I risk it, or bolt for Korea? I held to the same course and half an hour later changed direction 26 degrees to the left again. I reckoned that I had regained the direct line between Shanghai and Kagoshima.

Every minute the sea quietened, and soon I was flitting in a dead calm over a dull glassy surface, with a faint tinge of burnished copper. A low gauzy ceiling obscured the sun, and increased the oppressiveness of the air. Doubts began to press on me, and tried to panic me; doubts about the accuracy of my drift reading, about the sextant work, about my compass. My neck ached with twisting, as I searched the horizon. My chart ended a few miles south of Kagoshima, and I was attacked by crazy suggestions, one after the other, to change course and fly north or north-east, or south-east. For each of these in turn there was some queer reason why it was my only hope. Then I saw land 10 degrees to the left of dead ahead. It was an island, but which one? 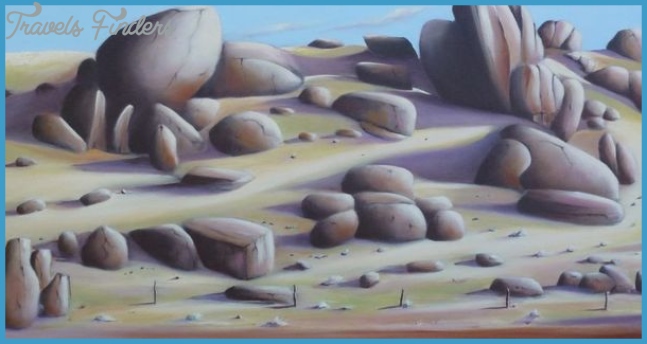