A nondescript building with the grandiose name of World Tridacnidae Pearl Exhibition Hall in Shantou in Guandong province in southern China houses the world’s most incredible and jaw-dropping collection of monstrously deformed, gigantic pearls the size of a young coconut! Among the treasures are the world’s largest natural free pearl called ‘Star of the Sea’ and the world’s oldest natural blister pearl called ‘Heart of China’. All owned by Xie Shaohe the King of Pearls!


The pearls inside World Tridacnidae Pearl Exhibition Hall are not what you think – a typical, shiny, round pearl magnified a few hundred times and weighing a few kilos instead of grams. by Dato Kee Hua Chee No, these pearls from giant clams are so bizarre, mangled, seemingly molten and messy-looking that most would never mistake them for pearls as we know them. The size of a large orange or grapefruit, these pearls are grown onto the shell and not to be worn as jewellery. These clam pearls are too big to be strung as a pendant let alone a necklace. At 1 to 4 kg each, human necks are not made to be adorned with such bling. 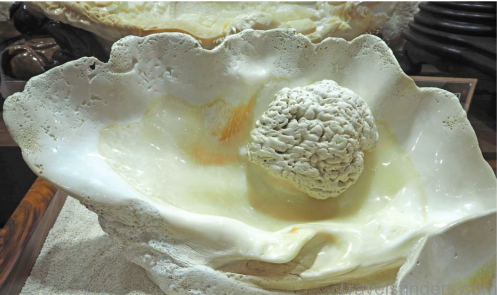 Unlike pearls cultivated in oysters, these pearls from the Tridacnidae family are not farm-friendly, and take up to a century to reach full size. The giant clam is the largest bivalve in existence and includes oysters, clams and mussels. The largest specimen measures over 4.5 feet (1.3 metres) wide and weighs 550 pounds (250 kgs). Due to their size, many legends have sprung up over the centuries, as the Tridacna Gigas easily lent themselves to harrowing tales of divers having their hands or legs caught in their vice-like grip and eventually drowning. The Pearl of Lao Tzu (initially named Pearl of Allah) was said to be discovered inside a giant clam when fellow divers found the diver dead with his arm trapped inside the shell. 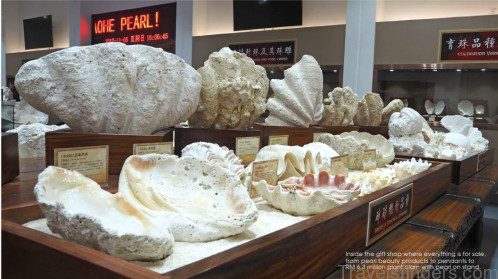 Of course, some may say this served him right for stealing and looting! The prosaic truth is less thrilling and fearsome. It is certainly true that if you poke your arm inside the poor clam’s sensitive inside, the shell’s valves will automatically close, but in defence, not from aggression. And they close too slowly to pose a serious threat to life and limb! In addition, most big specimens cannot close completely! So it is not a matter of having your hand snapped shut inside the shell within seconds, as popular legend would have you believe! Today, giant clams are considered more meek and mild than dangerous and aggressive.

Still, the monikers of ‘killer clams’ and ‘man-eating clams’ persist, which is just as well, as these giant molluscs are now endangered. Of the nine species, six are found in China, which is a boon to the museum’s owner Xie Shaohe, who has spent his entire life experimenting, discovering, promoting, cultivating and marketing his freshwater pearls with nucleus as well as seawater pearls. After graduating from Zhanjiang Fisheries College (now Guangdong Ocean University) in 1978, Xie Shaohe remained at his alma mater and continued his studies under Professor Xiong Daren, the father of modern Chinese pearl. 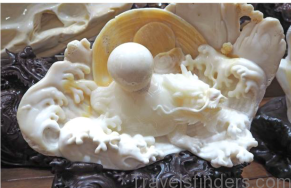 Of course, it was Mikimoto who discovered how to cultivate pearls in oyster farms instead of searching for them in the wild. But Mikimoto pearls are seawater, whereas Xie Shaohe concentrated on its poor cousin – freshwater pearls. In 1982, he started researching freshwater pearl cultivation and founded Chenghai County Xinxi Pearl Farm. His theories bore fruit and in 1989, he developed the fledgling farm into Guangdong Shaohe Pearl company. Previously, pearls for jewellery were seawater pearls, as freshwater pearls were deemed inferior, cheap and too small to impress.

After three years of tedious experimentations, he managed to produce 5kg of the first batch of freshwater pearls with nucleus. Finally, he managed to produce 50kg of fresh water pearls with nucleus, considered a major feat. On 21 June 1991 at the 6th China Pearl, Diamond and Gem Jewellery Fair in Canton, it was announced he had become the first to successfully mass-produce such pearls totalling over 50kgs, though each pearl was only 6 to 8 mm in diameter. In 1992, even Japan acknowledged ‘freshwater pearls with nucleus’ was first invented in China. The method used was broadly similar to that employed in the more expensive and bigger seawater cultured pearls, but Xie Shaohe had found a cost-efficient system.

In 1995, Xie Shaohe’s big success with ‘freshwater pearls with nucleus’ led him to cultivate the seawater cultured pearl production, so he now appears to monopolise the market. In 2011, he was named ‘National Leader for Flourishing Agriculture by Popularisation of Science’ by China Association of Science and Technology under the aegis of Ministry of Finance. In 2014, he was selected as ‘National Innovation Model in Pursuit of Ambition and Contribution’ by the Ministry of Science and Technology. Other awards are equally flowery and I am sure you get the drift. Meanwhile, his passion for monster and monstrous pearls was ignited after reading the story of Pearl of Lao Tzu, they world’s most famous and largest pearl.

FACTS, FICTION AND FRAUD OF ‘PEARL OF LAO TZU’

Millions of dollars, murder, mayhem, lies, travesty of justice and journeys across seas and courtrooms are all attached to what some call the ugliest 14-pound, 9-inch lump of pearl in the world. It resembles a turbaned head of sorts, so the Muslim chieftain who first owned it named it Pearl of Allah. It was found in 1934 in Palawan, an island in Philippines by a young Dayak whose comrades found him dead from drowning, one arm trapped inside the closed shell. After prising open the giant clam to retrieve the corpse, they saw the gigantic mass of pearl and took it to their chieftain. This is the romantic version ok?

The facts have been so interwoven with fiction you just have to decide for yourself. But below is true. Two years later, an American archaeologist Wilburn Cobb happened to have quinine with him and saved the chieftain’s son from malaria. In gratitude, Cobb was given the pearl. Cobb brought it to New York City in 1939 and had it authenticated it was indeed a genuine tridacna pearl by Roy Miner of American Museum of Natural History.

Cobb then exhibited it in Ripley’s Believe it or Not Odditorium, where it was claimed to be the world’s biggest pearl and was valued at US$ 3.5 million, a shocking figure at the time. It vanished from view for 30 years before Cobb wrote a tantalising story about it in the February 1969 issue of Mensa magazine. He claimed when the pearl was being shown in 1939, a certain Mr Lee came from China, declaring it was the long lost Pearl of Lao Tzu, the famous Chinese sage and founder of Taoism. This Lee said that before Lao Tzu died some 2,500 years ago, he gave a jade amulet carved with the faces of Buddha, Confucius and himself to his disciples to be put inside a clam to grow into a pearl. Lao Tzu said if 3 teachers with differing views could co-exist peacefully inside the clam, so could all mankind. A secret society was formed to look after this pearl.

Service – is there any? And Tips Paris