On the west coast, the Solway Firth (remember a firth is a bay) is shared by both Scotland and England. Merging with the Firth of Clyde, it leads inland to Glasgow (about 900,000 people), and the major manufacturing city. Robert Burns country is not far south of Glasgow.

On the east coast, the Firth of Forth finds Edinburgh Castle, official residence of the reigning British monarch when in Scotland. This is a major attraction. Edinburgh is a city of marked architectural style, beautifully landscaped gardens and squares.

Below Glasgow are the Southern Uplands, where fishermen gather along the banks of the rivers Tweed, Fay, Dee, and Spey to angle for salmon. Do not expect to march up to a stream and fish. Acres along the rivers are owned or leased.

Perth (pronounced pearth by the Scots) is a base for Highlands exploration. Aberdeen, on the northeast coast, is a base for the North Seas oil drilling. It is a city of granite in that most of the public buildings, schools and many homes are made of granite. Balmoral Castle, summer retreat for the royal family, is nearby.

Off the jagged coast of western Scotland are some six hundred islands called the Inner Hebrides and the Outer Hebrides. Some are still completely owned by a noble family with all residents paying rent. Skye is the largest and most popular and is a short ferry ride from Kyle of Lochalsh. The Inner Hebrides include the islands of Islay, Jura and Mull. Part of Jura has its own micro-climate that has permitted the development of subtropical gardens. 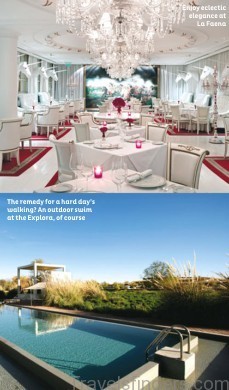 The Honeymoon on Horseback: Zapata Ranch Colorado US