Few have heard of Kaiping but this isolated region nearly 3 hours’ drive from Canton was a massive source of emigrants in the 19th century. Fleeing poverty and political instability, over a hundred thousand went to the USA and Canada seeking their fortune. Those who made it remembered their ancestral villages and clan, returned home and built some 3,000 towers incorporating a bizarre mix of western classicism and oriental motifs! Kaiping is a region caught in a time warp!

Grand Archway Quick – think of China’s UNESCO World Heritage Sites! Of course, the Great Wall of China, Forbidden City, Ming Tombs, Terracotta Army, Temple of Heaven, Summer Palace, all world famous. Kaiping belongs to this illustrious list, yet is hardly known despite being awarded this coveted status in 2007. Kaiping is an adorable anomaly. It is not a coastal port city and the early migrants must have taken days to reach the ships that would take them to San Francisco, which phonetically translates into ‘Mountain of Gold’! 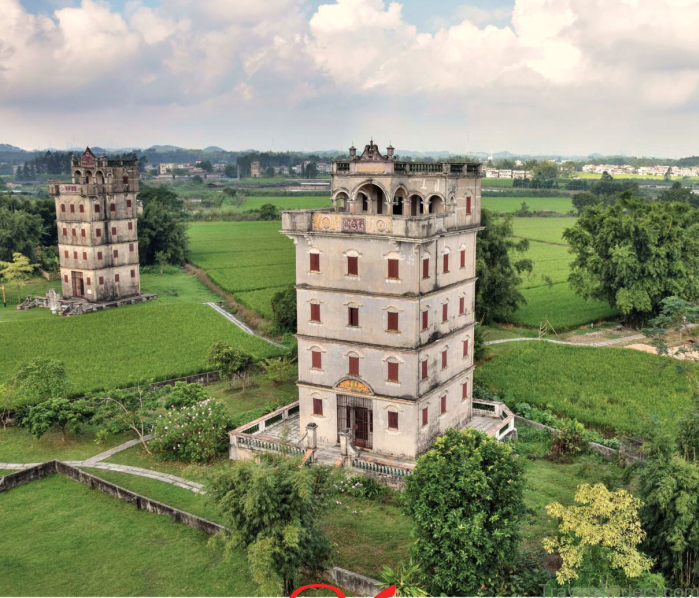 Lured by wild visions of gold for the digging, tens of thousands from Kaiping sailed into the western world armed with only hope and a few hundred dollars. After failing to find gold in metal form, many found it after opening restaurants and laundries. Some found wealth as industrialists. Though none were rich as the Rockefellers and Vanderbilts, many became rich enough to return home to Kaiping. Remembering their acute poverty days when they left as big-eyed teenagers, they started building 3 to 6 storeyed fortified towers that acted as houses and prestige trophies to honour their clans and ancestors beaming from heaven.

These structures were both homes and fortresses against bandits, though it seemed unlikely any three or five storey building can withstand any onslaught, as the weakest link would be the doors, which could easily be hacked and smashed. Despite Canton (Guangzhou) being relatively near and infinitely more important, all the fortified towers or ‘diaolou’ were constructed in the boondocks that was Kaiping. The building boom lasted a century and by the 1940s, the last diaolou had been completed. Visitors are bewildered by the bizarre fusion of Victorian gables, French windows, Italianate arches, Corinthian pillars, baroque flourishes, Chinese calligraphy and ornate panels – all in one building. 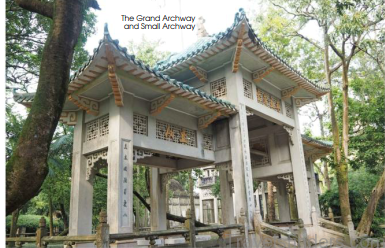 Some rooftops resemble the Doge’s Palace in Venice. Another looks like Brighton Pavilion in England. Many look like classic oriental pagodas stuck incongruously atop western style buildings. These exotic and fantastical buildings were built on individual land and rise like mirages amid paddy fields and vegetable patches, which make them seem even more out of place. Of the 3,000, only 1,800 remain standing. Some are still maintained by the original families and lived in by descendants, but most are abandoned or given to the state to maintain. Even the most romantic may not want to move in and stay permanently. Converting them into boutique hotels may be unviable due to the dearth of activities once you check in.

Still, UNESCO declared in 2007, “These Diaolou display a complex and flamboyant fusion of Chinese and Western structural and decorative forms. They reflect the significant role of émigré Kaiping people in the development of several countries in South East Asia, Australasia and North America, during the late 19th and early 20th centuries, and the close links between overseas Kaiping and their ancestral homes. The property inscribed here consists of 4 groups of Diaolou, totalling some 1,800 houses in their village settings.” 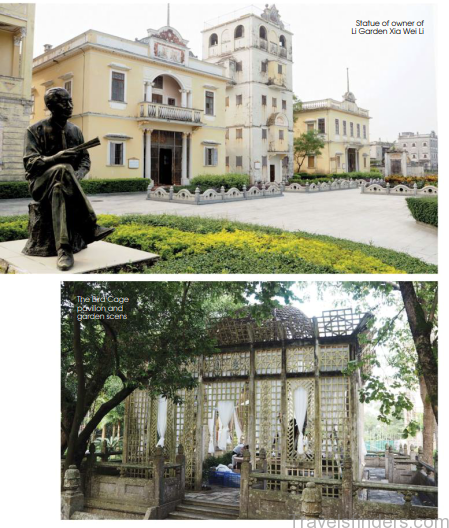 Kaiping was the setting for the blockbuster 2010 movie ‘Let the Bullets Fly’ directed by Jiang Wen, which added even more lustre to the place. Though each diaolou is unique and none are identical, I get the feeling there were just a few developers, as most look faintly alike with similar interiors, especially the staircases made entirely of reinforced cement. Many look like they need a new coat of paint and grime-removal. The main ones seen in brochures are open to the public, and the interiors are broadly similar, with the main reception hall upon entry and two smaller rooms on each side. Due to the emphasis on height rather than width, there are no airwells or internal courtyards like the Baba/ Nyonya heritage houses in Malacca and Penang, which are the exact opposite as they are usually two storeys and elongated.

The most famous, biggest and well- preserved enclave of dozens of buildings and annexes is Li Garden, built by USA-based Chinese Xie Wei Li in 1928. Built to impress are the 3 big watch towers with blocks of servants’ quarters a short distance away. Like all diaolou, they flaunt Western-style proportions with balconies topped by pagoda roofs reminiscent of Chinese temples. The founding owner stayed in the biggest at left, his uncle in the middle and relatives at right. But the real treasure is located behind, best reached by the meandering walkway across the manmade river. This is the celebrated and much touted Li Garden, built to recreate the fabled Grand View Garden, depicted in the epic Chinese novel ‘Dream of the Red Chamber’! This spectacular, manmade garden boasts the best of classical landscapes, which included ‘landscape with landscape’ with the artificial river connecting the disparate sections. Built from a masterplan in 1928, this Li Garden focuses on the concept of ‘bridges and brooks amid buildings’ and the result is breath-taking.

From specific sites, illusions are created, and you can see what seemed like mountains, seas and forests, but these are tromp l’oeil effects meant to lure the eye into seeing what is not there – the landscape within a landscape artform! Everything was based on feng shui with the layout meticulously planned from scratch for maximum impact. Built in 1931, the Bird Nest Pavilion blends Chinese and European designs, is round on top and square on bottom like heaven and earth. It is inspired by the Imperial Crown of Queen Victoria (though I don’t see any connection) and resembles a gigantic golden, latticed bird cage with a tortoise pond nearby for longevity. In its heyday, cages containing actual songbirds would hang from every corner, producing constant musical warblings and twitterings, which combined with the fragrances of flowers, would welcome fortune that comes with blooming flowers! The 5 roofs symbolise intelligence, education and the talent of Xie Wei Li’s 5 sons. Wei said “This Bird Nest is my prayer my descendants will never forget their motherland and remember to return home wherever they are, just like birds returning to their nests each day”.

Two grand arches dominate the garden. The Grand Archway has the characters ‘Li Garden’ written by leading Ching Dynasty academic Wu Daorong, who also calligraphed the advice ‘Virtue originates from great temperament’ based on Confucius’s theory. This is a reading pavilion on an exquisite scale with 8 pillars supporting a pavilion and 2 wings resembling the black gauze cap worn by imperial scholars! I walked across Kuanhong Bridge to Wanxing Pavilion on the manmade river, which ended in a lotus-filled lake. This pavilion is the apex of any traditional Chinese garden with glazed tiles, gravel stone walls, geometric designs and symbols of good luck. This double storey pavilion is meant for admiring the vast garden from various angles.

The Chinese love for puns and double meanings can be seen in a plaque written by Wu Daorong who cleverly wrote the character ‘Wan’ (‘evening’) in such an ingenious way it also resembles ‘Xiao’ (‘morning’), so the pavilion can be called ‘Xiaoxiangting’ when the sun rises and ‘Wanxiangting when it sets! So auspicious! Another architectural beauty that seduces is Guanlan Pavilion, built in the middle of a bridge. Small but perfectly formed, guests are encouraged to sit on the ledge to receive the happiness from the river flowing serenely towards and under it. The interiors of the residential towers are filled with furniture and furnishings from the era, though I suspect the originals must have been far more extravagant. The furniture in all the diaolou seem more middle class and not worthy of the wealth of the builders. The top floors are reserved as altars for the owners.

A quick drive away is Zili village, famed for its cluster of 9 diaolou built by the Fang clan, the richest in the region. Like everywhere else, Zili is a real working village and not Potemkin villages to impress tourists. I see inhabitants who could have stepped out of 1930 and not wielding handphones either! Zili has 63 households and 175 villagers who continue to receive financial support from 248 compatriots residing in the West, Hong Kong and Macau. Zili has 92 houses including 77 ‘3-room and 2-corridor’ traditional dwellings, 6 cottage style villas and 9 diaolou. The so-called ‘3-room and 2-corridor’ is the traditional design for single-storey homes in this province. The main door opens into the hall used to receive visitors and for family gatherings, catering and worshipping ancestors, though memorial tablets are worshipped in the attic.

The two rooms on each side of the hall are bedrooms. In front of the bedrooms are ‘corridors’, which is also the kitchen. According to tradition, after marriage, the sons should be economically independent enough to have their own ‘kitchen range’ (cooking stove) so each of the two corridors have their own cooking ranges. The grandest and most impressive is Mingshi Mansion, a massive 6-storey diaolou with the uppermost floor that could come straight from England or USA. A domed pergola perches at the top with 4 ‘swallow nests’ (look-out corners). Surmounted by Roman pillars, baroque clusters of plastered flowers and wreaths and hexagonal pavilion with pyramidal roof, this is quite a fantasy in cement. Built in 1925 by Fang Run Wen who lived in Chicago and made his fortune there, the main building comes with annexe and courtyard on 600 sq metres.

The interiors are exceptionally well-preserved and I recommend you spend time here rather than anywhere else. It is like stepping back into the 1930s with original appliances, gramophones, stained glass paintings, letters, books, Chinese newspapers, land deeds, remittance receipts, knick-knacks, yellowing photos and paraphernalia of a long-gone era of a lavish lifestyle enjoyed by returning overseas Chinese. Most stayed for a few months before returning to USA, Canada or Nanyang (Southeast Asia). Nearby are 3 buildings so alike they look like triplets. And well they should, as the trio were built by 3 brothers Fang Guang Kuan, Fang Guan Rong and Fang Guan Yin. They named them Yesheng mansion, Lansheng mansion and Guansheng mansion. I was surprised souvenir stalls are few and far between. I was told their wealthy overseas relatives send more than enough money, so farming remains their main occupation. Life is so laidback and easy should I wear a changshan suit, I would blend right in!

Online Printing Service – The Most Essential Tool In Marketing Arsenal