You won’t get bigger or better than at this ancient fortress, perched at the foot of North Africa’s highest mountain. ‘Off the beaten track’ doesn’t begin to cover it – yes, it’s just 40 minutes from the hustle and bustle of Marrakech, but when you’re standing on its roof terrace, savouring those incredible 360º views of the majestic snow-topped High Atlas peaks, believe us; civilisation will seem million miles away. 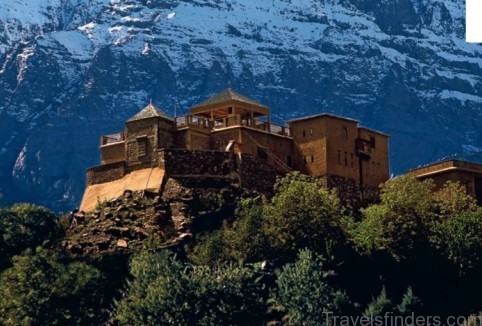 The adventure starts from the moment you arrive: the hotel itself is accessible only by making a short hike up winding paths with sheer drops to one side (don’t worry – an obliging mule will carry your luggage for you). Kasbah du Toubkal is famous for its trekking expeditions, with all levels and expertise catered for.

Choose a day’s hike around the nearby villages, meeting the locals and experimenting with traditional cuisine, or (alongside an experienced guide) lose yourself in the mountains for a few days, sleeping under the kind of night sky you can only find in true wilderness. Once back at the hotel, slip on your complimentary babouches (slippers) and sip mint tea with the smell of cinnamon wafting around you, before savouring the crisp air – and pure, pure silence.

OUR KIND OF LUXE Not quite at one with a sleeping bag, but still looking to camp? Why not spend a night or two at The Toubkal Lodge, halfway up Jbel Toubka, which has underfloor heating, three quirky luxurious en-suite rooms and, yes, those mountain views. GO Mr & Mrs Smith (mrandmrssmith. com) offers double rooms from £150 per night, on a B&B basis.