Covering over 1700 square miles yes, Top Secret America site #2 is larger than Rhode Island! this is where the Navy tests and develops secret airborne weapons systems.

In 1943, the Navy needed lots of land to test its new carrier-based airplanes and the bombs they carry. They found it about 120 miles northeast of Los Angeles, in a section of the Mojave Desert sandwiched between the Sierra Nevada mountains and Death Valley. The facility gets its name from the dry bed of China Lake, and encompasses most of the Coso Range, a group of volcanic mountains and cinder cones that are still geothermally active. Numerous lava flows, hot springs, steam vents, and boiling mud pots dot China Lake, and the most recent volcanic activity took place only a few hundred years ago. Minor earthquakes are common, and geologists consider future volcanic eruptions to be inevitable.

China Lake is located adjacent to Ridgecrest, a town of about 30,000. Most of the engineers and scientists who work at China Lake live in Ridgecrest, giving the town one of the highest average levels ol adult education in the country. The China Lake facility is split into two parts, with Highway 178 from Ridgecrest to Death Valley National Park serving as the dividing line between the parts.

What’s There: If it can take off from an aircraft carrier or be launched from a Navy ship, they’re working on it here. Cruise missiles, air-to ground missiles, air-to-air missiles, sea-to-sea missiles, anti-radar misilcs, and electronics weapons systems are still being tested at China Like. It is also used by the military of friendly nations, such as Unlain’s Royal Air Force, for training missions as well as testing. Day-lmie operations are limited to known weapons systems, with testing of Getting a Look Inside: Thanks to the centuries-old efforts of Native American shamans, you can venture further inside China Lake than almost any other comparably secure facility.

China Lake is home to the largest collection of petroglyphs Native American rock art in North America. Over 13,000 are found in canyons located at an elevation of over 5000 feet in the base’s interior mountains. All tours are escorted and scheduled for weekends in the fall and spring, and are conducted under the auspices of the Matu-rango Museum in Ridgecrest. Advance registration is required and you will have to submit such personal data as your social security number; you may be denied permission to take the tour if you are believed to be a “security risk” of some sort. Tours begin at the Maturango Museum and you will travel in a car convoy through the base to the pet-roglyph site, and will not be allowed to use any photographic or recording device until you get to the petroglyph site.

The drive to the petroglyph site takes almost an hour and climbs from the valley floor into the volcanic mountains that shield much of the base from public view. While nothing top secret can be seen along the route, you will notice several even more secure areas (high fences, warning signs, guarded entrances, etc.) within the confines of China Lake, indicating several parts of the facility are off-limits even to many who work there. The petroglyph site itself is very isolated with nothing visible for miles. However, the petroglyphs are spectacular and well worth the trip for their own sake.

The U.S. Naval Museum of Armament and Technology is near the entrance to China Lake; it has displays of weapons developed at China Lake, including the Polaris submarine-launched missile, the Tomakawk cruise missile, and the Sidewinder air-launched missile (unfortunately, none of their current projects are on exhibit). The mu seum is open 10 a.m. to 4 p.m. Monday through Thursday.

Unusual Fact: Highway 178 from Ridgecrest to Death Valley is a play ground for jet fighters; it’s not unusual for cars along this isolated road to be buzzed by jets flying only a couple of hundred feet overhead. 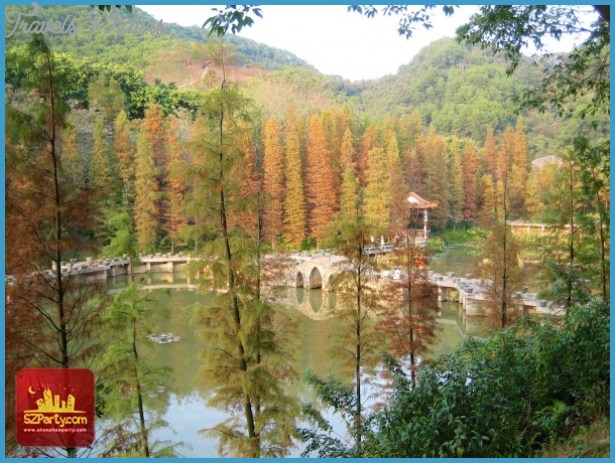 WINDOWS OF THE WORLD SHENZHEN