Spain has become a major destination, not only for Europeans on holiday, but for American vacationers and university students as well. In 2017, Spain set a new tourism record with 60 million visitorsup 4.4 percent compared to the same period in 2017 (January to October).

There are many reasons why people are flocking to Spain: sunny climate, an alternative to less perceived dangerous’ or unsettled locations in Europe of late, the weak Euro and the overall amazing attractionsfrom historic art and dancing to food. The top three groups of international travelers include: the Brits, the Germans and then the French.

I’m in the group of Americans who have steadily increased their visits to Spain since 2003. One of the reasons my husband and I chose Spain was because he speaks Spanish and I saw this world language map showing Spanish is one of the easiest languages to learn. Even though English is spoken most places, it’s always more comforting having a few key phrases and terms in your arsenal when traveling to a foreign country. So I checked out an app or two to learn basic Spanish phrases, which made me feel more at ease in restaurants, taxis and just for reading signs while shopping.

This was our second trip to Barcelona, which we took during mid-May. While it was unfortunately during a rainy and cool period, it was the perfect time to comfortably log many walking miles, shop, sightsee and enjoy different types of food. During Spain’s current heat wave in June there are many people who would gladly pay for the weather we had (only four weeks ago). But don’t despair, in the larger cities, such as Barcelona, there are cold drink and gelato carts and cafes every few steps. My favorite dessert while there was actually Red Bull gelato. Of course you have to love Red Bull but why not combine a boost of energy with a known frozen delicacy.

While in major cities there, don’t miss the many creative street performers. Although they must be melting with their costumes and body paint during the heat wave, they are a hearty crew with many talentsfrom dancing to staying in a fixed pose for hours. No matter how old you are, you will be amazed at their innovative looks and overall stamina.

One of the biggest draws to Barcelona is architecture and phenomenal works by Catalan architect and artist Antoni Gaudi. His magnum opus is the SagradaFamilia church. This one of a kind temple, which was first constructed in 1883is astonishingly still being built. It’s expected to be finished in 2026, which would be the centenary of Gaudi’s death (1926). The playful, whimsical nature of Gaudi’s architectural style cannot aptly be described in words; one must see photos, but better yet, go visit Barcelona. Take in not only Gaudi’s cathedral, but also look up his other architectural feats in the city.

After a great AVE train ride from Bareclona to Madrid, the capital city, we visited the Museo del Prado, known for major collection of both European and Spanish art spanning the 12ththrought 19th centuries. Highlights include Diego Velazquez, Titian and Peter Paul Rubens. The best known work is Velazquez’s Las Meninas, Spanish for the Ladies in Waiting. Whether you have had art history or not, you will recognize at least a few of these masterpieces, many of which have been handed down through the ages and can be seen in pop culture today.

But my favorite, favorite part of the trip was flamenco dancing at the infamous Tablao Flamenco show at the Corral de la Moreria. You can have dinner with a ringside seat among professional dancers who pound the stage with nuclear force, yet an artistic flair. During the performance I was lost in the moment and could envision this craft just as it was hundreds of years ago. The guitar music helps with this time travel as you hear beats reminiscent of a time long ago.

As you plan your adventure to Spain, learn a little Spanish, map out landmarks, attractions and most importantly, explore this fine country off the grid. 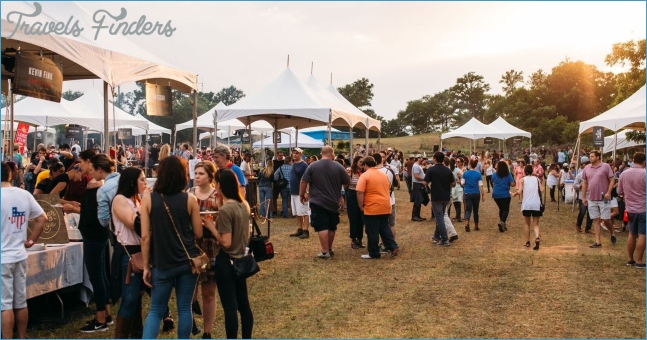 Best vacation places in the USA

MOLLY’S AT THE MARKET NEW ORLEANS