Geographers include Papua New Guinea as part of Australasia. The largest island, after Greenland, Papua New Guinea is shared by the independent nation of Papua New Guinea and Irian, an Indonesian dependency. The place is huge. Many of the residents are stone-age in culture. They are said to be very friendly but when a group of tourists laughed

at a group performance they were attacked with spears. Even so, Port Moresby, the capital, has a university and is setting up an extension program. It is a gateway town, population about sixty thousand.

Papua New Guinea is for the travel connoisseur, not your everyday vacationer. It is remote, primitive, and decidedly different. The highland country is primitive indeed. It was not until 1933 that the natives first saw a white man. Tribes of the interior still carry on spear fights with their neighbors. Those killed are smoked and set on a view site above their village so that they can continue to see what is going on with their people. Today in some villages guests are received, for a fee.

Parts of Papua New Guinea are incredibly isolated and primitive. Valleys are separated by rugged mountains, so difficult to traverse that some tribes believed they were alone on this earth. The campfires from the next valley were thought to be from the spirit world. Constant warfare between tribes was the norm, headhunting a preoccupation. Today at least one tribe is under contract to stage a headhunting show for tourists, re-enacting the hunt for the camera.

The airplane lifted the people directly out of the stone-age, but with some confusion. The natives quite naturally saw the planes as huge birds. One chief brought a basket of bananas to feed the first plane to land and inquired about its sex. The airplane was first used to search for and mine gold. Today it is still the only means of access for much of the country. The natives quickly accepted air transport and use it for personal travel and as a means of transporting coffee, their principal export crop.

Five hundred provinces offer a diverse scenery and people. The country’s highest mountain is only 420 miles from the equator but often powdered with snow. The people live primarily on sweet potatoes, taro, bananas, and pigs. Pigs are the traditional item of the wealth.

The Sepik River is a mile wide at its mouth and navigable for almost all of its seven-hundred-mile length. The Fly River in the Western Province flows south from the center of New Guinea for 650 miles. When it reaches the sea it is fifty miles wide.

Though 717 languages have been recorded, official languages for the three million people of Papua New Guinea are pidgin, English, Melanesian, and police motu. Bisnis bilong turis, pidgin for the tourist business, is picking up as roads and landing fields are built and as the natives acquire a taste for the tourist dollar. Don’t be in a big hurry in New Guinea. Melanesian time has a lot in common with the Latin American manana. 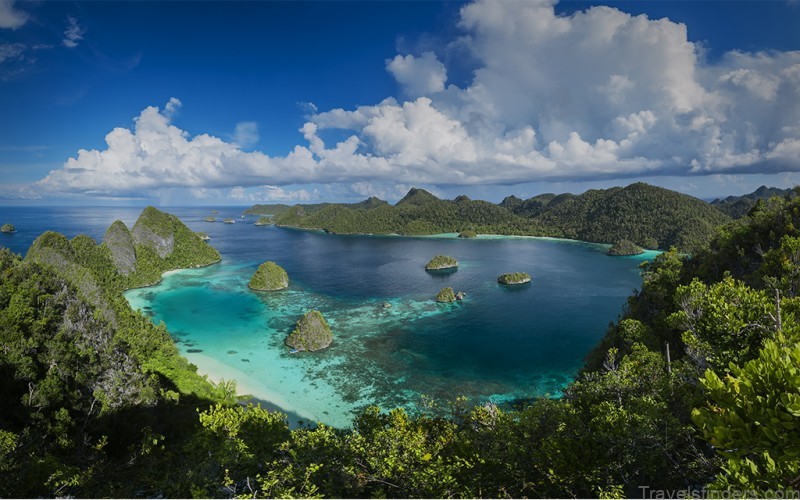 FROM DUBOIS TO MORAN JUNCTION