Home
American
WITHOUT INTERVENTION, SOUTHERN CALIFORNIA COULD LOSE A MAJORITY OF ITS BEACHES BY 2100

WITHOUT INTERVENTION, SOUTHERN CALIFORNIA COULD LOSE A MAJORITY OF ITS BEACHES BY 2100

As cities across the southeastern United States piece themselves back together following a season of major hurricanes and tropical storms, and wildfires wreak havoc in Oregon and North- ern California, climate change threatens the fu- ture of another region: Southern California. A 2017 study published in the Journal of Geophysical Research predicts that by the end of this century, sea-level rise could gobble up between a third and two-thirds of Southern California’s beaches, many of which are both scenic treasures and major economic engines for the area.

WITHOUT INTERVENTION, SOUTHERN CALIFORNIA COULD LOSE A MAJORITY OF ITS BEACHES BY 2100 Photo Gallery

According to the study, which makes use of a new model called CoSMoS–COAST (Coastal Storm Modeling System–Coastal One-line Assimilated Simulation Tool), rising sea levels will result in the complete erosion of between 31 and 67 percent of Southern California’s sandy beaches by 2100. Sean Vitousek, a professor in the Department of Civil and Materials Engineering at the University of Illinois at Chicago and the lead author of the study, says that places such as Malibu have already lost much of their beach, and the rate of loss only promises to increase owing to sea-level rise, which he says will account for almost 70 percent of future erosion. 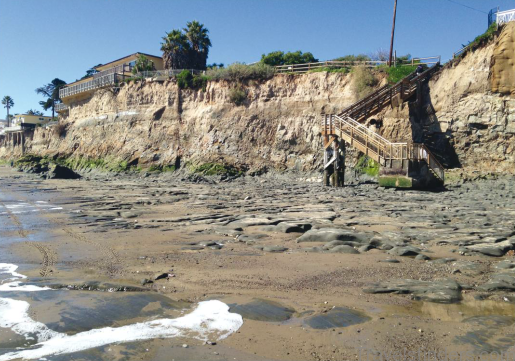 Beach loss may seem like a secondary concern for cities and states facing threats to critical infra- structure and private property, but in 2012, ocean- dependent tourism and recreation in California’s Los Angeles, San Diego, and Orange Counties generated nearly $8 billion in gross domestic product, according to a report by the National Oceanic and Atmospheric Administration’s Office for Coastal Management. A small beach restoration project, however, hopes to find a way to thwart the study’s grim future. Ear- lier this year, the Bay Foundation, a Santa Monica- based environmental nonprofit, and Studio-MLA restored a roughly three-acre portion of Santa Monica Beach. 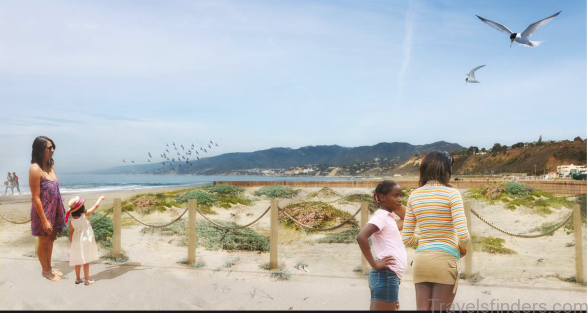 They installed fencing and planted native flowering species like sand verbena, which should, over the course of a few years, help form dunes between one and three feet high. These dunes will provide a physical barrier between the ocean and developed areas, as well as a living system that can respond naturally to sea-level rise and storm events. “We have to be thinking about what kinds of things, aside from seawalls, we can be doing to attenuate sea-level rise,” says Kat Superfisky, As- sociate ASLA, an associate and urban ecologist at Studio-MLA. Installed in May 2017, the project aims to test whether or not the best practices of dune restoration—often employed in natural areas—can work in a high-traffic, urban area.

“We’re looking at how quickly and how well these dunes [are] going to establish themselves. How well are the plants going to do?” Superfisky acknowledges that one-off pilot proj- ects are not a solution, but rather a necessary first step in testing living shorelines in the real world. Long term, regions like Southern California need master plans for their coastlines, she says, and her experience in ecosystem management has con- vinced her that landscape architecture is vital to the success of such projects. “Most of the projects I lead, I find the same thing, where I’m trying to coordinate with scientists that are doing amazing research and getting them to look outside of the microscope,” she says. “I very much see the role of landscape architects as the orchestrator, the conductor, and I believe that the profession needs to step up and assume that role.”